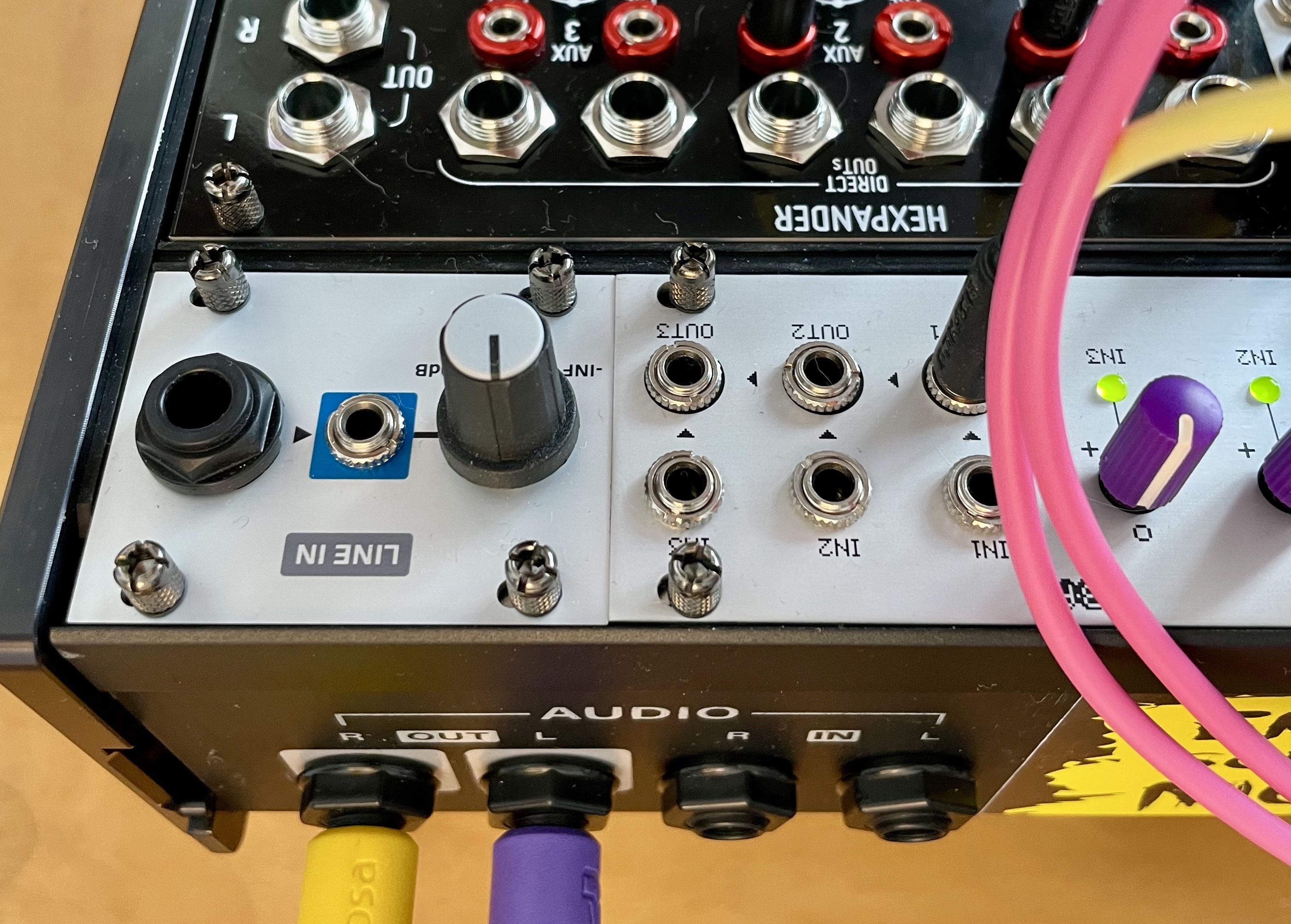 I got a new case for my Eurorack synthesiser. One of those fancy Intellijel Performance ones, with audio In and Out jacks on the rear panel. I like the idea of having at least those cables out of my way very much. Of course, like maybe every Non-Intellijel mixer, my Befaco HEXMIX has no connector for this. But blessed are they who do have a soldering iron and are not afraid to use it on their precious gear.

It is not very difficult to make your own connection cable and attach it to your mixer. I will describe in this text how I did it with my HEXMIX respectively HEXPANDER, but this should be possible with most other Eurorack mixers. Keep in mind that Eurorack audio is very loud (around 5-10Vp) compared to line level audio. The output Jacks of your case will not magically convert your loud Eurorack signal into a moderate line level signal. You could fry your connected gear!

One more thing: The HEXPANDER’s Master Out and the Audio Jacks on the rear of the Intellijel cases are balanced. What I’m explaining here breaks this. You will get an unbalanced signal out of your case’s jacks. It would be possible to do this balanced, but I was lazy and I don’t need it (at the moment). If you need it balanced, because you have to use long cables, you can still use the HEXPANDER’s Master Out. Maybe I will update this How To in the future.

Okay, let’s do this

On the other side we have Intellijel’s Audio Jacks Board. In my case the 2nd generation (take a look to determine). The output signals go through the right 6-pin plug (“Pfostenstecker” in German). The easiest way to measure which pin is for what is by plugging in a cable in one of the audio jacks and measure with a multimeter from tip and sleeve of the cable to the different pins. Then do it again for the other jack (yep guessing would also be easy at this point, smart ass).
You don’t have to do it, if you have a 2nd generation Audio Jacks Board. I already did it for you. 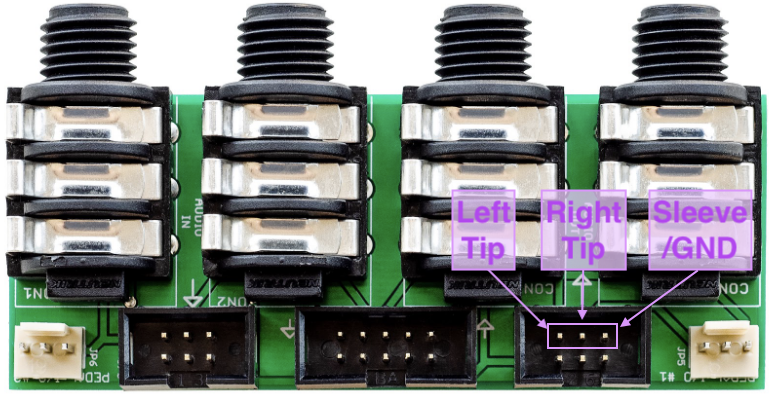 Put the Pfostenbuchse (plug) on one end of the cable. Split the other end of the cable and cut away the unused wires. Holding the wire like I do on the photo, the right wire of any pair is used (blue, grey, black). If you want to make sure, use your multimeter. 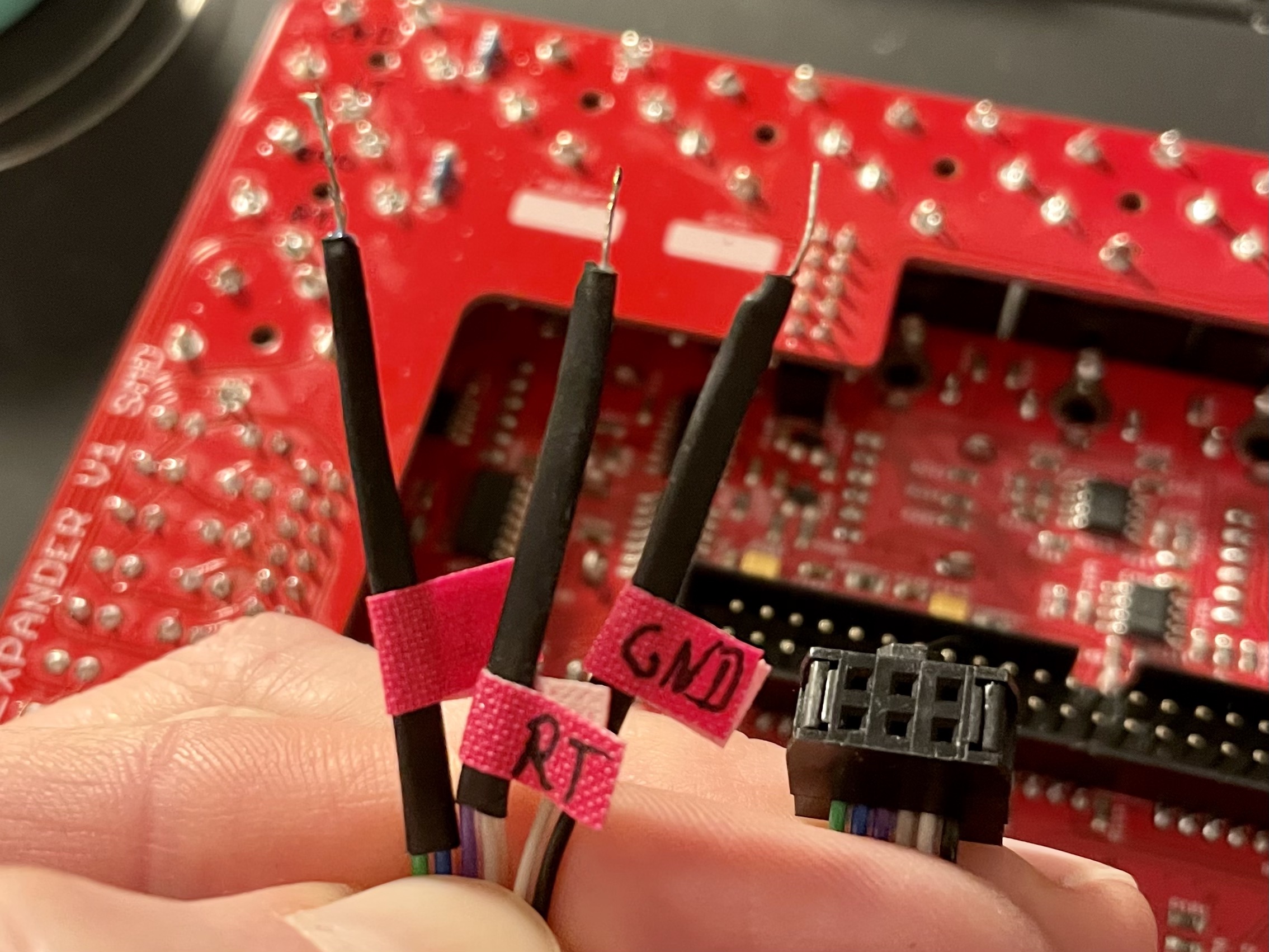 On your mixer, finde the pins of the output jacks and determine which one is for what. If you are also using a Befaco HEXPANDER and it looks like mine (there are variations) you can use my accurate and good looking markings (GND = ground/sleeve, LT = left tip, RT = right tip).
If it looks different or you are not using a HEXPANDER, measure like described above. Plug a cable in the jacks. Measure from tip and sleeve to the pins until you know. The sleeves are ground. All ground is connected. This is why there is only one ground wire for the sleeve pins of the left and the right jack in our ribbon cable. 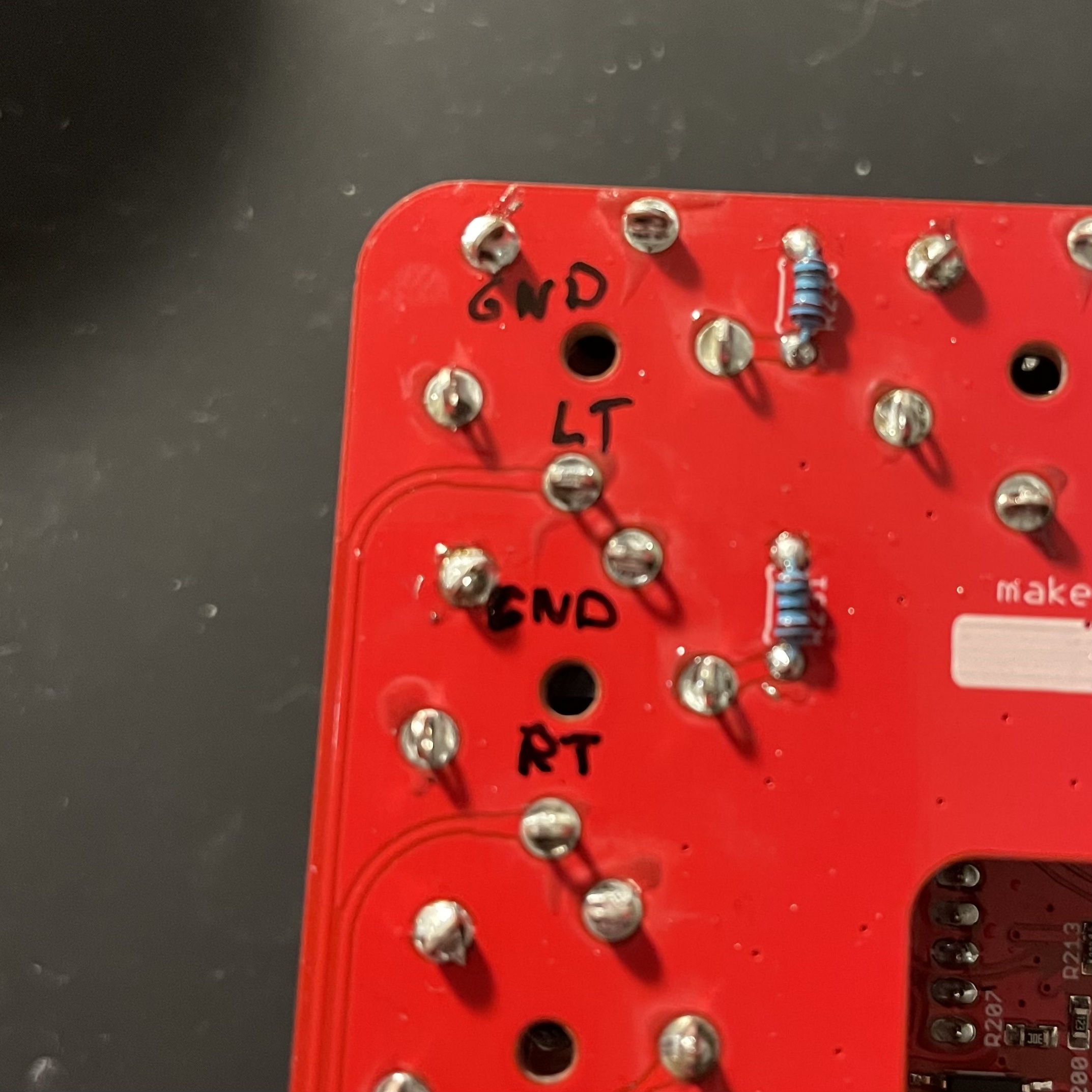 Solder the separated wires of the ribbon cable to the identified pins and plug the other end of the cable into the Pfostenstecker (plug) of the Audio Jacks Board in your case. 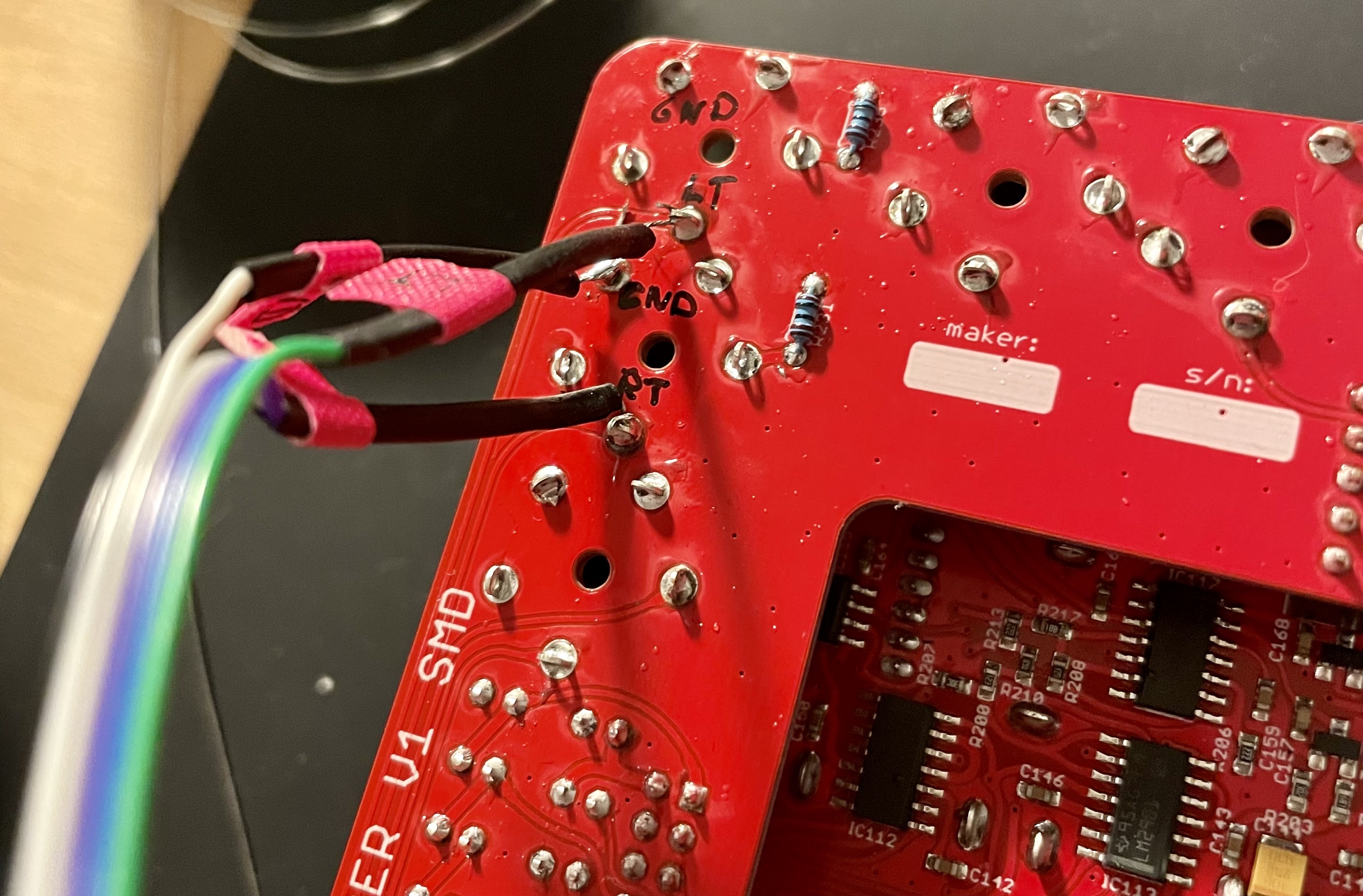 If you managed to not break your stuff (Which would absolute be not my fault!), you might be happy now. I was. I still am. Have fun and maybe show me a picture or something audible of your work. I would appreciate it very much. You can reach out to me via social media.

Getting chords out of a modular synthesizer is not fun. At least not for me. Maybe it is for people with more skill or bigger systems or a stronger masochistic streak in them than I got. But for me, it’s close to impossible. I have a Plaits which can do chords, but I like and use it for other reasons.

What I really like and what gives me a warm feeling is the sound of (maybe a bit jazzy) chords consisting of a bunch of simple sign waves. Not a difficult thing to do on your favorite polysynth, but as I said, not fun on a modular. And when I saw the Chord Organ by Music Thing Modular do it in the easiest way ever, I wanted one.

About the Chord Organ?

The Chord Organ is an alternative firmware of another eurorack module by Music Thing Modular respectively Tom Whitwell, the Radio Music, kind of a sampling radio thingy. The heart of the module is a teensy microcontroller which can be freely programmed. So, the module can be seen as a more or less simple platform for all kinds of possible eurorack modules.

The Chord Organ plays chords. The root note of the chord is defined by a CV input and a knob. The same counts for the chord shapes. Up to 16 shapes can be defined in a configuration file (CHORDORG.TXT) and be selected via another CV input and knob. In addition, it is possible to configure some more features in this file, like glide, note stacking and some more. Fot the fans of microtonal music it is also possible to create a separate tunig file (TUNING.SCL), to have the Chord Organ tuned in an alternative way.
That is roughly it.

So, I got my kit from the UK (Did I ever mention what a pain in the ass this brexit clusterfuck is? I will never get over it…), built it and played around with it. It is great. I love it! <3

What seemed a bit unnecessary to me was whenever I wanted a different behavior of the module, I had to remove the SD card, go to my computer, make changes to the config file and then go back to my modular to re-insert the SD card and reload. So, I wanted to change this (and maybe because the feature creep is strong in me).

With my modified version of the Chord Organ firmware it is possible to have up to ten different config files on the SD card. They would be called: CHORDORG.TXT, CHORDORG1.TXT, CHORDORG2.TXT…CHORDORG9.TXT Loading the next file is done by a long butten press (at least for one second). The number of blinks of the waveform LEDs indicate which file will be loaded.
The long button press was formerly reserved to toggle the stacked notes feature on and off. But since note-stacking is also configurable in the config file, this feature still exists, if wanted.

This way, it is possible to cycle through different tunings, if you want to.
I for my part have no clue about alternative tunings, so sorry for the bleeding ears in my little demo.

You can find the Chamäleon fork of the firmware repository here.
The current Chord Organ Chamäleon hex file can be downloaded here. This one can be loaded to your module via the Teensy Loader Application directly.

Many thanks to Tom Whitwell and Martin Wood-Mitrovski for this fantastic device!
Have fun with your chords.

A while ago I started to build a little Eurorack to extend my beloved Moog Grandmother. Most of my modules are DIY kits and I quickly noticed that building my Eurorack is at least as much fun as actually making music with it.

Some time ago, for a patch idea I wanted to do, I needed the possibility to add two voltages more or less precise. I was not happy with the stuff I had (Eurorack Disease). So, I took my breadboard. After some web search-assisted remembering of what I learned about electronics many years ago and an extremly professional circuit drawing, I had my first way too big nupsi prototype.
To fit it into the last 4HP of my 1U utility row, I designed PCBs. Then I noticed that it is not completely insignificant to think about orientation while designing interconnected PCBs. So, I designed PCBs again (which is surprisingly cheap!). This is how I created my first Eurorack module. Its not very complicated, innovative or crazy, but it’s cute and small.

So why am I telling you all of this? Because don’t be scared to try stuff out. It is fun to create something and I forgot how good it feels. Go for it.

This is not too hard to describe. It simply adds two voltages, positive or negative. This could be control voltages (CV) like for instance adding a static offset from a voltage source to an 1 volt per octave CV signal. It is build of a TL072 OpAmp, so it’s fast enough to use nupsi as a simple audio mixer by just plugging in two audio signals.

But it’s main feature is it’s small format, because it fits exactly in this annoying 4HP gap in my 1U row for which no useful modules seem to exist. Coincidence? I think not! 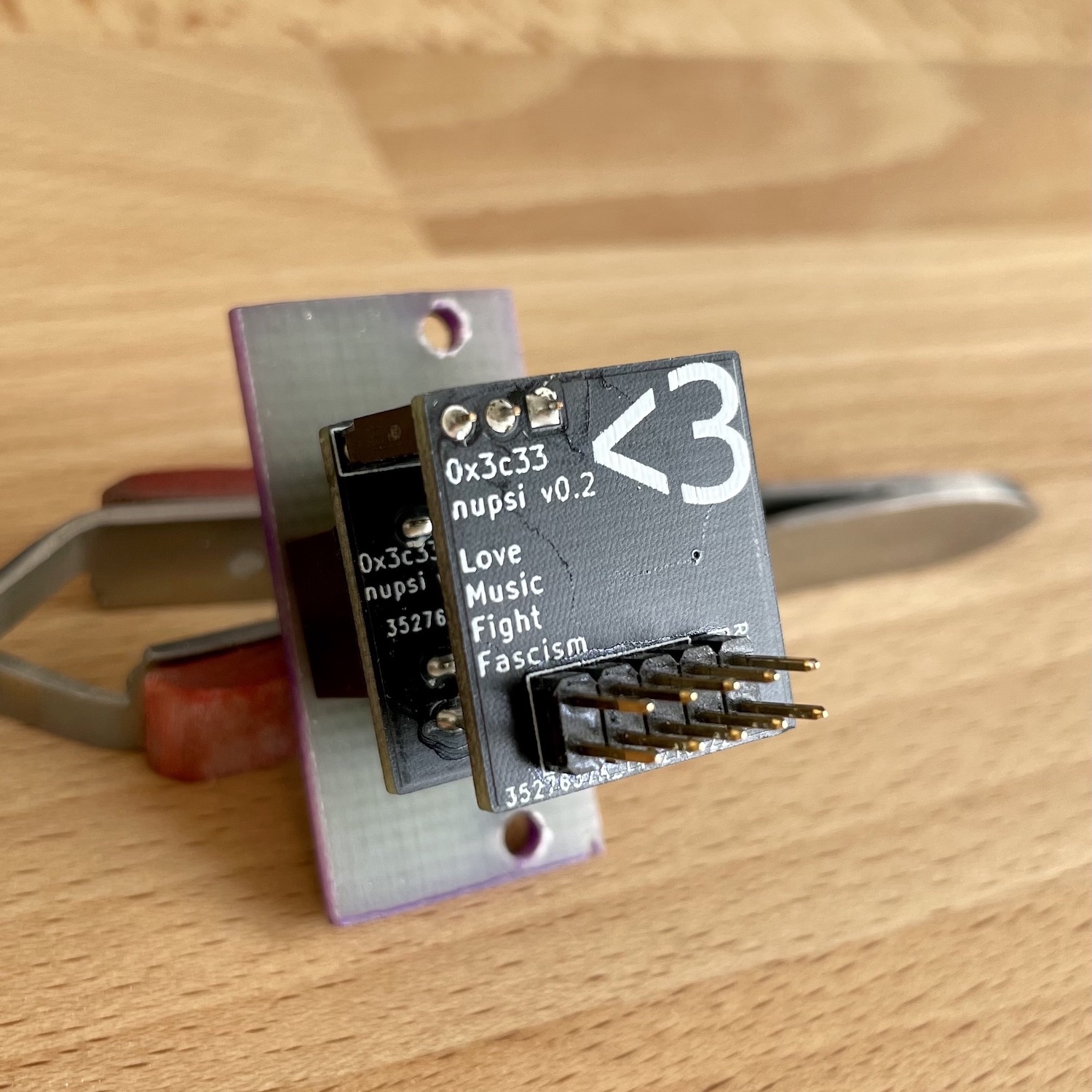 If you want your own little nupsi, drop me a mail, currently I have some spare PCBs, which I can send you. The build is fairly easy. It is just a few parts, but some of them are SMD, so you should have soldered before. I would say, nupsi is a perfect first try SMD project. ;)

The front panel is made of a peace of plastic I had laying around and some paint. You would have to make your own.

nupsi is not openly listed, but via this link you can find it on ModularGrid.